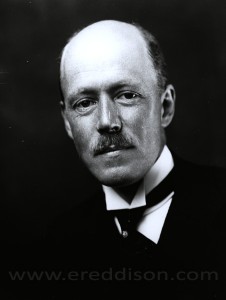 Eric Rücker Eddison was born 24 November 1882 in Adel, Yorkshire, the eldest of two sons of Octavius Eddison, solicitor, and his wife, Helen Louisa (née Rücker). Adel was then a village, five miles north of Leeds, surrounded by countryside and close to open moorland.

His early education was conducted at home by a series of tutors whom he shared with Arthur Ransome (the future author of Swallows and Amazons), the child of a neighbouring family. The two became lifelong friends and spent many hours in adventurous and imaginative play, some of which included the germs of Eddison’s later fiction. Afterwards Eddison attended Sunningdale Preparatory School in Berkshire before going to Eton, where he developed an interest in Icelandic. He went to Trinity College, Oxford in 1901 to study classics (Literae Humaniores), graduating with a 2nd class degree in 1905.

The following year he joined the Board of Trade, where he remained for the next 22 years in a variety of roles. During the First World War and immediately afterwards (1915-1919) he was Private Secretary to successive Presidents of the Board of Trade. In 1924 he was made a Companion of the Order of St. Michael and St. George (CMG) for his role as Secretary to the Imperial Economic Conference held in London in 1923, to establish the rights of dominion countries to determine their own foreign policy. He was Comptroller of the Companies Department at the Board of Trade, 1924-1928.

In 1928 he moved to the Department of Overseas Trade as Head of Empire, Trades and Economic Division. He was created a Companion of the Order of the Bath (CB) the following year (an honour awarded to senior civil servants). He was promoted to Deputy Comptroller-General in 1930, and travelled to Canada for the British Empire Economic Conference held in Ottawa in the summer of 1932, which set out preferential tariffs for trade between countries within the British Empire. He took early retirement in 1938 in order to devote more time to his literary work.

Throughout his career in the civil service and during his retirement, Eddison forged a career as a writer. His first novel, The Worm Ouroboros, published in 1922 was praised by critics for its self-assurance and its introduction of a fully-imagined, fantastical world. He returned to this world in his later novels, Mistress of Mistresses (1935) and A Fish Dinner in Memison (1941), and was working on the third volume of the trilogy, The Mezentian Gate, when he died in 1945.

He was a keen Norse scholar, teaching himself Old Norse while at school and later at university. In 1926 Jonathan Cape published his re-imagining of a Norse saga, Styrbiorn the Strong, a fictional account using historical figures. His translation of Egil’s Saga was published in 1930.

He was a member of the Athenaeum Club and was elected a Fellow of the Royal Society of Literature in 1945. 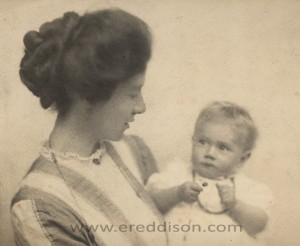 Wife and daughter of E.R. Eddison

He married Winifred Grace Henderson at Christ Church, Lancaster-Gate, London, 18 February 1909. The following year they had a daughter, Jean Gudrun Rücker Eddison, born 5 January 1910. It was a long and happy marriage.

He died suddenly, 18 August 1945, while gardening at the home he had built for his retirement in Marlborough, Wiltshire. His ashes were interred in the grave of his father, Octavius Eddison, in Adel church cemetery.